The 2020 Convocation Convention will take place in Nice, France,
October 22-25, 2020. More information will be available soon.

(The 2020 Convention will be a "hybrid event" in which both in-person and virtual participation will be possible.)

From Convention Secretary, the Rev. Deacon Richard Cole:
At its recent virtual meeting, the Council of Advice discussed preparations for our scheduled Convention in Nice this coming October.
I am writing to advise you that the Council has decided to make this year’s Convention a “hybrid” event, offering delegates the new possibility to participate, to the maximum extent, on a virtual basis - including voting.
We still plan to hold an in-person event. That event will necessarily be shaped by the strictures of these demanding times. Nevertheless, Council felt that, with the help of strong support and flexibility on the part of the organizing team in Nice, plans can and should go ahead for an in-person Convention, with an on-line, virtual attendance option.
It goes without saying that this decision is subject to there being no resurgence of the virus between now and then that would occasion new travel restrictions and border closings. Contingency plans are being made should Convention need to be held entirely on a virtual basis.

The clergy and people of Holy Trinity in Nice (a Church of England chaplaincy) have helped to host our Convention in Nice every ten years. Our former Episcopal parish in Nice, The Episcopal Church of the Holy Spirit, was merged into Holy Trinity in the early 1970s.

The 2019 Convocation Convention took place on October 24-27, 2019,
and was hosted by Emmanuel Church in Geneva  at the Château de Bossey

The 2019 Convention was held at the Château de Bossey, which is near Céligny in a lovely location overlooking Lake Léman (Lake Geneva) and the Alps. It is the home of the Ecumenical Institute of the World Council of Churches, which offers ecumenical studies to students from around the world. As well as enjoying the beautiful location, it gave us an opportunity to interact with the students, especially during lunch.

Here are some documents related to the 2019 Convention:

The Convention is an annual meeting that brings together representatives of all the parishes, missions, and affiliated communities of the Convocation. These representatives -- both clergy and lay -- make decisions and policy for all Episcopalians in the Convocation and, with the Bishop, help us to maintain our connection to the wider Episcopal Church, the Anglican Communion and beyond.

Each parish and each organized mission sends two elected delegates designated by their vestry or Bishop’s council. These delegates along with the four lay members of the Council of Advice and the clergy canonically resident in the Convocation all have the right to vote. A representative from each of the Convocation's mission congregations is also seated and accorded full voice in the business of the Convention. Guests and other participants along with anyone interested in attending are generally accorded voice.

The principal business of the Annual Convention is to address legislation and resolutions. The Convention receives reports from the Bishop and various committees and commissions, hears the financial report and votes on the budget. Most Conventions include a program on a theme, with presentations and discussions. These often are designed to engage the participants in looking ahead, or in deepening and learning more about our mission and ministry, and may result in guidelines for the future. Near the end of the Convocation Convention, the Assemblée générale of the Association 1901 of the Convocation of Episcopal Churches in Europe, the French legal entity of the Convocation, convenes briefly to approve of newly elected Bureau (Council of Advice ) and the financial report.

Above all, the Convention is a community gathering. It is a weekend of listening, learning, worship and prayer. All in the Convocation and friends are welcome to attend the Annual Convention.

Every three years, the Convention also elects one lay and one clergy observer to the Synod of the Diocese in Europe of the Church of England for three-year terms. The Synod sends two observers to the Convocation Convention. They are given voice but no vote. 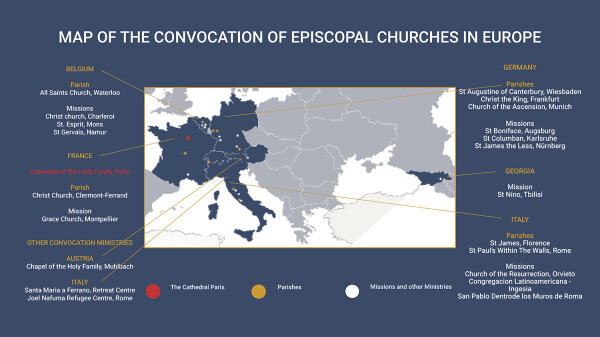