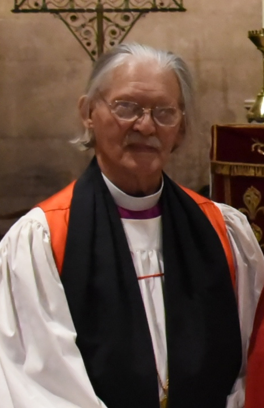 Bishop Rowthorn was born on 9 April 1934 in Newport, Monmouthshire, Wales. From 1952 to 1954, he served in the Royal Navy as part of National Service. During this time, he studied Russian at the University of London. He then studied modern languages (Russian, German, Persian and Arabic) at Christ's College, Cambridge, and graduated from the University of Cambridge with a Bachelor of Arts (BA) degree in 1957; as per tradition, the BA was promoted to a Master of Arts (MA (Cantab)) degree in 1962. Having been awarded a Rotary Foundation Fellowship, he studied at the Union Theological Seminary, a nondenominational Christian seminary in New York City, United States.  He graduated with a magna cum laude Bachelor of Divinity (BD) degree in 1961. In 1961, he returned to the United Kingdom and entered Cuddesdon College, an Anglican theological college near Oxford, to undertake one year of training for ordination. He later undertook postgraduate study while a priest and academic. He completed a Bachelor of Letters (BLitt) degree at Oriel College, Oxford in 1972 and was awarded a Doctor of Divinity (DD) degree by Berkeley Divinity School in 1987.

Rowthorn was ordained in the Church of England as a deacon on 30 September 1962 and as a priest on 29 September 1963, both times by the Rt Rev Mervyn Stockwood, then the Bishop of Southwark. From 1962 to 1965, he served his curacy at St Mary Magdalene, Woolwich in the Diocese of Southwark. From 1965 to 1968, he was Rector of the Benefice of Garsington in the Diocese of Oxford. During this time in parish ministry, he was also a lecturer at Cuddesdon College, a theological college in Oxford.

In 1968, he moved to the United States. He then joined the Union Theological Seminary, New York City, as Chaplain and Dean of the seminary's new Master of Divinity ministerial training program. In 1973, he joined Yale University as an associate professor at Berkeley Divinity School and the newly created Yale Institute of Sacred Music. He taught pastoral theology and liturgics. Among his students at Berkeley at Yale was the current Presiding Bishop of the Episcopal Church, the Rt. Rev. Michael Curry.

In May 1987, Rowthorn was elected a suffragan bishop by the Diocese of Connecticut. He was consecrated as a bishop on 19 September 1987 by the Rt Rev Edmond L. Browning, the then Presiding Bishop of the Episcopal Church (and sometime Bishop in Charge of the Convocation 1972-1975). The co-consecrators were Arthur E. Walmsley and Adrian Delio Caceres-Villavicencio. As one of two suffragan bishops, he had oversight over the eastern half of Connecticut. In 1993, he stood for election as Bishop of the Episcopal Diocese of Connecticut but was unsuccessful.

On 1 January 1994, he was appointed Bishop in Charge of the Convocation of Episcopal Churches in Europe (the jurisdiction of the Episcopal Church that covers Continental Europe). The Presiding Bishop of the Episcopal Church has jurisdiction over the Convocation but oversight is delegated to another bishop known as the Bishop in Charge. In April 1994, he was installed at the American Cathedral in Paris in Paris, France. From 1995 to 2001, he was additionally an assistant bishop of the Church of England's Diocese of Gibraltar in Europe. He retired at the end of 2001.

He married the former Anne Wheeler on November 16, 1963 and they have three children. Bishop Jeffery and Anne make their home in Salem CT, USA, and visit the Convocation from time to time, most recently for the ordination and consecration of our current Bishop in Charge in April 2019.

Bishop Rowthorn is author of many articles, several books, many hymns, including collections of hymns, and of two hymns found in the Hymnal 1982, most notably, #528 "Lord, you give the great commission."

In 2001, the Rowthorn Fund for Mission was set up in honor of his ministry among us. It has been used for mission-related grants since 2003.