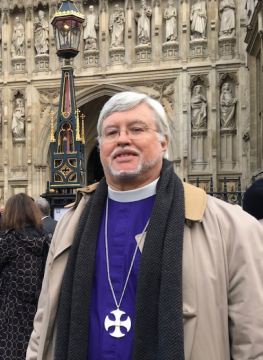 After nearly 18 year in office, Bishop Whalon has resigned the position of Bishop in Charge effective April 6, 2019, when his successor the Rev. Mark Edington was ordained bishop in a festive liturgy in the American Cathedral of the Holy Trinity in Paris.

Bishop Whalon announced his intention to resign his position of Bishop in Charge of the Convocation of Episcopal Churches in Europe at the Convocation Convention in 2016. This began a discernment process, search process, and the election of a successor. On April 6, 2019 Bishop Whalon's successor, the Rt. Rev. Mark D.W. Edington was ordained Bishop and Installed as Bishop in Charge.

Bishop Whalon was ordained Deacon in June 1985 and Priest in December 1985. From 1985 to 1991, he was Rector of All Souls, in North Versailles, Pennsylvania. He then served as rector of St Paul’s, Elkins Park, Pennsylvania, from 1991 to 1993. His last parish position was serving as rector of St Andrew’s Church and School in Fort Pierce, Florida. He was elected Bishop of the Convocation of American Churches in Europe in June 2001 (since renamed the Convocation of Episcopal Churches in Europe) and consecrated in Rome, November 2001, at St Paul’s-within-the-Walls.

A columnist for Anglicans Online since 1999, he has also been a feature writer for Tribune 2000 (a Paris-based, liberal Roman Catholic magazine in French) and has published a number of articles and book reviews in both Anglican and secular publications.

Bishop Whalon is a member of the Christian-Muslim Summits and co-author and signatory of its foundational document, An Inter-Religious Call Commitment to Action. He was a member of the commission that produced the Episcopal Church’s statement on interreligious relations in Toward Our Mutual Flourishing, commended by the 2009 General Convention. He is also a past member of the Anglican Communion Network for Interfaith Concerns.

He has a longtime interest in refugee issues, and in 2007, he co-founded The Association aux minorités d'Orient (AEMO), a French-based non-profit organization that has been resettling people in need in France ever since. Some 5000 people -- those at risk of death for reasons of their faith -- have been resettled with AEMO's help.

Whalon is a dual national of the United States and France and is bilingual in English and French. He has studied German, Spanish, Russian, Latin, New Testament Greek, and has now added Italian.

In what spare time he has, he enjoys playing the organ, fishing, writing, cooking, weightlifting, learning new languages, and the cinema.

In 2019, the Whalon Fund for the Creative Arts (WFCA) was set up by the Convocation in honor of Bishop Pierre's  ministry among us. The fund is dedicated to supporting both the visual and performing arts in the parishes and missions of the Convocation.

Bishop Whalon can be contacted through his webpage: http://pierrewhalon.info

AT THE INSTALLATION OF POPE FRANCIS: BISHOP WHALON PRESENTS THE POPE WITH A BOOK OF COMMON PRAYER ENS 19 APRIL 2013

A SELECT LIST OF THE BISHOP'S ARTICLES AND ESSAYS