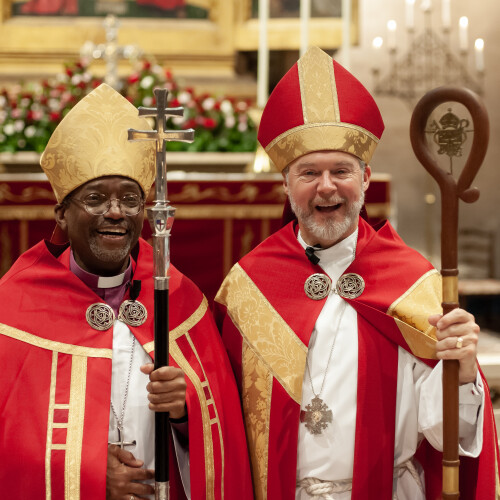 Bishop Edington became Bishop in Charge of the Convocation of Episcopal Churches in Europe on April 6, 2019.

The Rt. Rev. Mark D.W. Edington of the Diocese of Massachusetts was elected as the next Bishop in Charge of the Convocation on October 20, 2018. The election took place during the annual Convention of the Convocation in All Saints Church in Waterloo Belgium.

He is the second elected bishop of the convocation. Bishop Edington left his positions as rector of Saint John’s Episcopal Church in Newtonville, Massachusetts, and director of the Amherst College Press and joined the Convocation of Episcopal Churches in Europe effective March 1, 2019. His Ordination and Consecration as Bishop took place on April 6, 2018 at the American Cathedral of the Holy Trinity in Paris, France. As part of this liturgy, he was  installed as Bishop in charge of the Convocation, succeeding Bishop Whalon in this position.

The Rt. Rev. Mark D.W. Edington worked both as an ordained Episcopal priest, also a higher-education executive, social entrepreneur, writer, and editor. Appointed in 2014 as the founding director of the Amherst College Press, he has spearheaded the creation of a 54-college consortium supporting Lever Press, an open access, peer reviewed scholarly press. Prior to his appointment at Amherst he served as the senior executive officer of interdisciplinary research centers at Harvard, including the Center for the Study of World Religions and the Harvard Decision Science Laboratory. His work in academic publishing has encompassed directing the publications program of an independent think tank focused on issues of international security and foreign policy, and as a consulting editor at Dædalus, the journal of the American Academy of Arts and Sciences.

Ordained in 2001, Mark served as the first Epps Fellow and Chaplain to Harvard College in The Memorial Church of Harvard University, living in residence as visiting scholar in Adams House. Subsequently appointed Associate Minister for Administration, he served as the chief operating officer of one of the largest and most influential university churches in the nation. In addition to undergraduate ministry, his responsibilities included serving as the point of contact between Memorial Church and the body of more than thirty chaplains from all denominations and faith traditions accredited to serve communities in the university, and oversight of the field work program for training seminarians. More recently, as rector of Saint John’s in Newtonville, Massachusetts, he has authored Bivocational: Returning to the Roots of Ministry (Church Publishing, 2018; www.bivocational.church), an exploration of alternatives to the received economic model of congregational life based on the expectation of a full-time, benefited professional as the ordained leader of a community.

Bishop Mark served as an officer or director of a number of non-profit organizations. Since 2014 he has been a trustee of Adrian College in Adrian, Michigan, where he sits on the Academic Affairs and Strategic Planning committees. From 2013-2016 he served as well as a director of the Harvard University Employees Credit Union, where his work encompassed service on the institution’s audit committee. As a member of the founding board of three NGOs, he has a deep commitment to civic engagement with foreign policy and interfaith engagement in both dialogue and service. A founding director of the 2Seeds Network, he was part of a team focused on creating a new path linking the need for strengthening ethically grounded leadership in the developed world with the need for improving self-sufficiency in the world's poorest countries.

Bishop Mark writes frequently on issues at the intersection of public policy and religion. His essays have appeared in The Atlantic Monthly, the New York Times, the Christian Science Monitor, and other national publications. He has blogged on The Huffington Post and on WBUR’s Cognoscenti, and is a frequent commentator on New England Public Radio. He is a life member of the Council on Foreign Relations, where he is active in the Religion and Foreign Policy program.

He is married to Judith, a graduate of Albion College, Boston College, and Harvard Law School, who is Counsel in the Tax Department of Sullivan and Worcester, Boston. She is admitted to the bar in the Commonwealth of Massachusetts and the State of Illinois.

Read the sermons by The Rt. Rev. Mark D.W. Edington, Bishop in Charge,
preached since his consecration as our Bishop on April 6, 2019. Link here 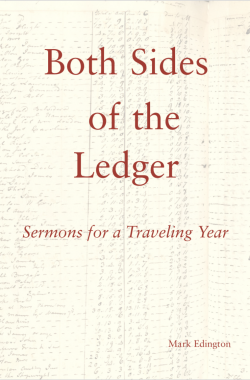