Taking Initiative to Address the Sin of Racism

After two years and more than 1,300 surveys, the ground-breaking Racial Justice Audit of Episcopal Leadership is now available to the wider church and public. The audit identifies nine “patterns” of systemic racism – ranging from the historical context of church leadership to current power dynamics -- that will also be highlighted in three public webinars in May and June.

Historic Efforts to Eradicate Racism within the Episcopal Church

The House of Bishops of The Episcopal Church pastoral letter on racism expresses the teaching of the church: “Racism is totally inconsistent with the Gospel and, therefore, must be confronted and eradicated.” The Bishops invite all baptized Christians to fight racism and to “proclaim the vision of God’s new creation in which the dignity of every human being is honored."

The Episcopal Church has expanded its commitment to the development of programs that address the sin of racism. The 78thGeneral Convention earmarked $2 million for racial justice and reconciliation initiatives in the triennium (2016-18), including funds for continuing anti-racism education training programs for Episcopal clergy and laity. Training programs invite Episcopalians to explore the context for / historical development of racism; to help us to recognize more fully how deeply embedded racism is in the structures of society; to consider how racism is perpetuated in institutions, including the church; how the sin of racism continues to manifest itself, in our ourselves and in our culture; and how racism affects both people of color and white people.

In the Convocation of Episcopal Church in Europe, The European Institute of Christian Studies has convened regional anti-racism training workshops in Germany, Italy, and France. In 2010, the Convocation received a grant for its work in support of the development of a new anti-racism curriculum for use in cross-cultural settings.

House of Bishops Pastoral Letter on Sin of Racism, March 1994

Anti-Racism Resolutions of The General Convention

Seeing the Face of God in Each Other: Antiracism Training Manual of The Episcopal Church (4th edition) 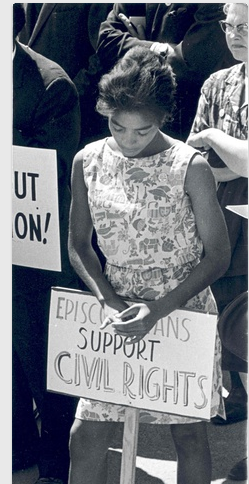