The Wisdom That Wanders 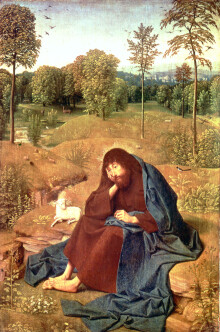 Text: Luke 3:7:   “John said to the crowds who came out to be baptized by him, ‘You brood of vipers!
Who warned you to flee from the wrath to come?’”

We know from the gospels that John the Evangelist cut quite a figure in early first-century Palestine. He had a large following; he had a group of disciples who were close to him; there was talk among the people that just possibly he was the messiah, the one who had been promised. He seemed to have something magnetic about him. He wasn’t just an itinerant preacher; he was a charismatic prophet. People were drawn to him.

The scholars tell us that John and Jesus were, at least to most folks, sort of similar. They were both critical of the religious leadership of their day. They were both figures the authorities were bothered by. And they both ended up executed by those authorities.

Of course we know that they were cousins, and that they had at least one encounter, when Jesus comes to John to be baptized at the Jordan. And we know that John’s disciples came to Jesus at least once to ask him if he was who they thought he was.

Indeed, we know there was a continuing group of disciples of John who endured into the second century, and that even today there is a small group, the Mandaeans, who regard him as their greatest and final prophet. It’s enough to make you wonder why there wasn’t more of a competition in the days of antiquity as to which of them would be seen as the greatest by history.

Maybe we get a little bit of an answer to that puzzle in the lesson we heard this evening, which is appointed for the Third Sunday in Advent. Because in Luke’s account, we find John out in the wilderness preaching repentance, and quite literally the very first words we hear him speak are: “You brood of vipers!”

And that’s what he says to his supporters.

John may have been a prophet with an audience, but he also put people on edge. At least as far as we know, he didn’t balance off the hard sayings with happier images, like Jesus did. No story we have from John starts out with words like, “The Kingdom of God is like...” or “Blessed are the meek...”

Maybe that has something to do with why John’s little following eventually died out.

I wonder what effect those words have on you. Certainly once you’ve heard them, they’re not easy to forget. But just because it’s such an artful phrase—not really something you find yourself saying every day, unless maybe you’re a herpetologist—it’s easy to dismiss as exotic, or archaic. It doesn’t really apply to us.

He’s talking to his own people—Jewish people who have gotten so worried about where things are headed, so concerned about the stability and security of their world, that they have decided maybe now it’s time to see whether God can help them. Maybe now it’s time to try all that faith stuff. That John guy is out at the river today baptizing people—maybe we should go try it.

In these very first words we hear from him, John is trying to teach those people—trying to teach us—something about the heart that is truly open to God, and how it is different from the kind of cagey calculation that decides to cover a God bet with a little bit of what you have—a carefully measured-out bit of your time, a cautiously ventured corner of your reputation.

To the minds of John’s Jewish listeners, that brood of vipers image calls back immediately to mind another serpent­­—the very first one at the tree of the knowledge of good and evil. Remember that snake’s pitch to Eve? You will be like God, knowing the difference between good and evil.

And we did eat. And the first thing we saw was our nakedness—the nakedness of our ambition.

We have inherited the wisdom that is the consequence of that choice. That knowledge, the knowledge of good and evil, and the capacity for will that goes with it—that is all ours now.

For the most part, we use that wisdom well. We go out into the world and find a profession. We pursue knowledge in a hundred different ways to advance ourselves. We make thousands of conscious and unconscious choices about how to invest our time and energy, what risks to take, who to choose as friends and mates, what groups to be part of. We are extremely successful as a species.

But it didn’t turn out that way. We chose otherwise. We are not perfectly suited for the life we’ve chosen; we were meant for something else. But we have made our own way in the world, found our own path, been the masters—or maybe the subjects—of our own unpredictable wills.

But then, the world turns dark again. Just like those folks around John, we are increasingly troubled by the insecurity and instability of our world. What will happen with Covid? What will happen in Ukraine, or Taiwan? Does yesterday’s failed negotiation in Vienna mean for the future of peace in the Middle East? How will things go for the new government in Germany?

We prize our abilities. We love our self-sufficiency. Most of us here—with the exception of Father Robert—grew up somewhere else and had to make our own way here. We have a pretty good opinion of our opinions.

It’s only when things feel like they’re getting beyond our capacity to understand, or predict, or in some way control, we start looking around for help. And we show up at the banks of the Jordan.

That’s what John is talking about—the fact that we come down to the river, and we come to Advent, out of fear, not out of love. That we’ve spent most of the year, most of our lives, trusting in our own capacities, confident in our own choices—and then when things look like they might be beyond us, we show up to ask God for help.

Now, don’t worry too much. After all, John baptizes those folks—at least the ones who stay around after hearing him speak to them that way. And they, just like we, are welcome, always, in God’s purpose and God’s plan.

The advent question for us in this old, unsettling story is just this: What if we didn’t wander away after the dictates of our own beloved wisdom? What if we made choices that aligned us a little bit more with what we were designed to do—be in God’s company, with God’s people, on God’s plan?

What would our lives look like if we trusted ourselves less, and God more? If we learned the bitter lessons of our own failures and mistakes, and took a more humble view of ourselves—and a more hopeful view of God’s place in our lives?

May these remaining days of Advent open in our hearts the courage to trust in God’s promise, and the confidence to be called God’s people, that we may respond with eager joy to the sight of the star, and the news of his coming. Amen.